A human hand contains 29 bones, 34 muscles, 123 ligaments, 30 arteries and 43 nerves. Taking all those numbers into account, it's no wonder hands have fascinated artists over the centuries. The variations are endless.

Everyone has seen Abrecht Durer's "The Praying Hands." It's a pen and ink drawing executed in 1508. 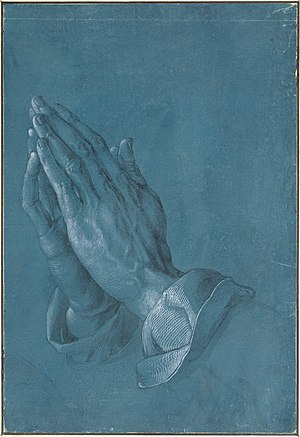 Below is a El Mano (The Hand) by Mario Irarrazabal. It was installed in 1982 in Uruguay 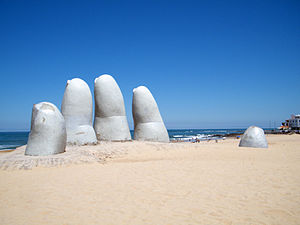 The Hamsa, also called The Hand of Fatima is a centuries old design motif from the Middle East. The design and meaning of the Hamsa varies a bit from country to country but essentially it represents protection by God from evil.

Hamsas are seen in architecture, textiles, decorative objects and jewelry. Here are two pendants, one in gold with turquoise and the other in silver with enamel. The Figa or fist motif is also centuries old. Usually seen as a closed fist with the thumb between two fingers, its meaning has morphed from a talisman to ward off evil to an obscene gesture in some Middle Eastern countries. Interesting off-the-subject tidbits: America sign language letter T is shaped like a Figa and my paternal grandmother's maiden name was Figa. During the reign of Queen Victoria (1837 through 1901), hands were very popular motifs in jewelry. The position of hand and fingers have different symbolic meanings.  A hand with first finger extended is a warning to keep away. These two are from the 1940s. The hand pin on the left sports an engagement ring. The fur clip and earrings set on the right dates to 1944. It's a Coro design called Friendship. You've got to hand it these designers. High Five to each of them. Or maybe I should say Hang Ten and Hang Loose; depicted below in a pin by Great Falls Metal Works.